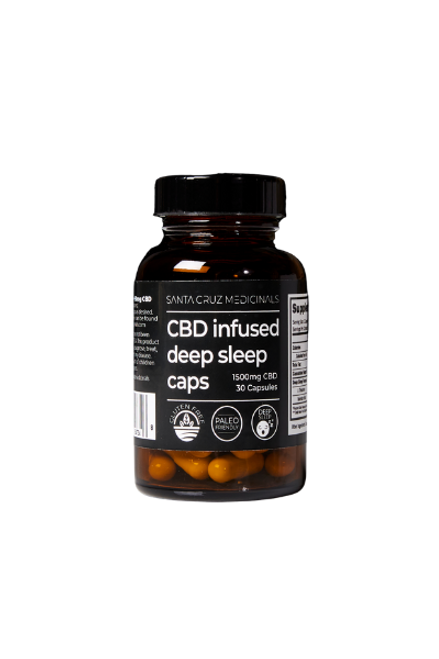 These 1500mg CBD infused Deep Sleep Capsules are used to get the deepest nights rest and wakeup feeling refreshed. This product is formulated using a potent dose of CBD, 200mg of L-Theanine, and 150mg of Valerian Root. The result is a formula that makes me sleepy but leaves me refreshed in the morning.

We suggest you start with 2 and see how you feel as this formula is potent. Each bottle contains 1500mg of CBD. Each capsule contains 50mg of CBD.

Here is a little information on each ingredient:

Valerian Root:  Valerian’s efficacy is thought to be a result of its effects on multiple neurotransmitters and hormones including gamma-aminobutyric acid (GABA), cortisol, serotonin, and adenosine. Many of the benefits of valerian root, particularly those for anxiety and stress, are thought to come from its ability to enhance the efficacy of GABA a neurotransmitter important for calming the body and relaxing the mind. Recent research suggests that two components of valerian root—valeranol and valerenic acid—are primarily responsible for these effects on GABA. They’re both capable of binding to GABA receptors, which increases the brain’s levels of GABA and thus its efficacy. Furthermore, research on mice has found valerian root to reduce corticosterone levels, which is the equivalent of the human stress hormone cortisol in mice. Consequently, some of its relaxation potential can likely be attributed to a reduction of cortisol levels in humans. Valerian also has been shown to help maintain natural levels of serotonin, a neurotransmitter that plays a key role in modulating mood and sleep.

CBD: CBD is currently being researched for its benefits in many aspects of cognitive function and sleep. CBD by itself can allegedly serve as a sleep aid due to its anxiolytic (anti-anxiety) properties. There have been some amazing pubmed studies on CBD and sleep. When combining your dose of CBD with the powerful ingredients above, you are setting yourself up to have an amazing nights rest.

This product is Paleo, Gluten-Free, Vegan, Sugar-Free, and Keto!

By clicking yes and entering purecannabox.com, you certify that you are of legal smoking age in the state in which you reside.